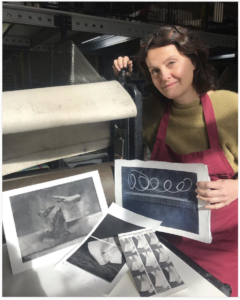 Focus is a new series of emails from LANGart in which we put the spotlight on one of the gallery’s artists. In the current era, in which we have had to significantly reduce personal contact, it seemed like a good idea to make the person behind the art more visible. In our previous Focus we highlighted the work and life of Lin de Mol, this time it’s Monica Ragazzini’s turn. If you missed a Focus than you can find them on our website on the respective artist page. 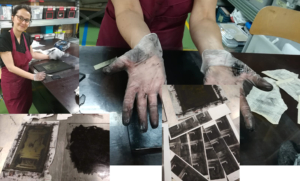 In March and June 2020 did a residency at the AGA Lab in Amsterdam. I really wanted to master the art of Toyobo printing during this residency so I would be able to print my own work with this technique. To me printing a photograph isn’t the final stage of a product, but it’s an integral part of the art piece. Do check out this short film of the process. I have travelled all over in order to learn as much as possible from different printing techniques. Toyobo is a fairly new technique which combines etching and photography without the use of chemicals. Like with photography the image gets transmitted to a light sensitive plate.  After developing the image in water and fixation the plate is ready for printing like as with etching. What i like about this technique is the combination of ink and paper which allows me to use all scales of black and white and every shade of grey in between. In this way i can combine modern digital photography with craftsmanship. 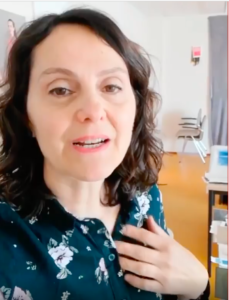 For Akzo Nobel I made this short selfie film in my studio during the first Corona lockdown spring 2020. Follow the link to see the film.

I moved to Bologna in September. I wanted to be closer to my mother and had the desire to work in Italy for a while. I got a job as a art history teacher in a high school and I put all my belongings in eight boxes and two suitcases, and left. Bologna is the capital of the region where i’m from: Emilia Romagna. This region is well know for its agriculture in the Po river plains, Parmaham, Parmezan cheese and of course the pasta Bolognese. A bit further to the south the Apennins flash at the horizon. Bologna is a very old city and many buildings are from the middel ages and the renaissance. The university of Bologna was built in 1088 and is the oldest university in the world. The original wooden lecture hall is beautifully preserved. For my new series I visit the churches of bologna a lot, but very often, nowadays, the doors are shut.

Now that I teach art history in my mother tongue I perceive it differently, with a fresh new look, you might say. I love to cycle through the labyrinth which is the inner city of Bologna, always with one eye focussed on cars and busses as they comment traffic in Italy and not the bikes like I have grown accustomed to in the Netherlands. 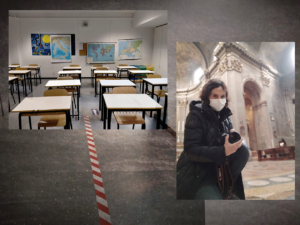 All restaurants and museum are closed. But all bookstores are open, that is really nice! Art gallery’s are open but new projects and activities are all on hold. I stroll the internet to get my dose of culture. It’s even difficult to meet with my colleagues from school, but when we do get together we have lots to share. Sometimes we get silenced by the burden of the weird situation we are all currently in.

I comfort myself with food. There are many amazing deli shops, what can i say, when it comes to food, Italians do it better.

A few weeks ago the schools re-opened. Before I was teaching through Meets. It was so surreal to wonder the school building without students. Now the kids can go to school for half the time they were used to. It’s really great to meet them in person. Despite all that they have been through this year they are positive about their future and energized to make the best of it!