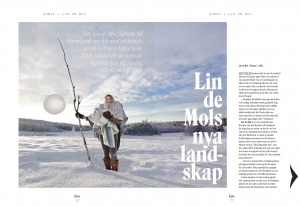 An article on the Dutch artist Lin de Mol, on her life and work since her move to Värmland in Sweden. By Yvonne Ihmels

There is a woman in the middle of a snow-covered field with a thick layer of blankets over her shoulders. In one hand, she holds a birch stem with a white balloon dangling from a frozen line. The balloon is as white and round as a moon. She looks happy, but maybe it’s just a brave smile. The woman in the picture is the artist Lin de Mol and the work is called ”Pioneer”.

”Pioneers are imagined as strong and courageous people, but I felt mostly vulnerable. But I really like my stick. The birch tree is a so-called pioneer tree, the first tree that grows up after a fire and the only tree that lights up the dark forests here in Värmland”.

Lin de Mol is one of the artists of the artist-group Kolonin. When she moved to Värmland just over four years ago, it was because she wanted to live in harmony with nature. That they ended up in Skofterud was only related to the fact that her partner got a job in Arvika and that they found a house there. “A wonderful house”, as she says. Or maybe there was also something in her that wanted to get away from what she calls “the contemporary art circus”.

Living in Amsterdam and staying on top as an artist means that you live in your studio. The whole society is characterized by this competition. It was about constantly producing and staying ahead.

For almost a decade she basically did just one thing; Traveling to remote places to gather material and then come home to Amsterdam and process the impressions in her studio and then exhibit the finished result at her gallery in Amsterdam, or other cities in Europe.

She is actually a trained monumental artist at the Rietveld Academy in Amsterdam, but on the road the camera was a more practical tool. But even though she made photos, it was often sculptural imagery and quite often in places devoid of people; desert landscapes. “Moons, many moons,” she says and laughs a little. And I fill in; A transparency, a frozen breath, a halo …?

She has often wondered why she is drawn to the empty space; There are many places that are more beautiful than a desert but maybe with these places it is like with a white paper. She needs that empty surface to be able to work. Find her ”flow”.

And moreover. All her travels, she thinks, connected to one thing. She was looking for a home, a place to live and feel at home. But moving to Arvika was in a way like being in a desert. It didn’t hit her until later. Shit! Now I am here and here there is neither audience nor galleries.

”But there is something special about nature here in Värmland. It’s so quiet. I have lived in Ireland, where the wind was omnipresent all the time and finally it became so strenuous. I have lived in Amerika and it was so loud and hot. Here in Sweden it is calm and quiet and it means I can work.”

The move to the countryside, to another country, has intensified her relationship with her art. If previously she could suffer from doubts about the meaning of art, the doubt today has been replaced by a necessity for her life and making art has taken on the form of an existential act. It has become an act of survival, says Lin and her work has increasingly become more personal.

This summer, when it was too hot to work on her sculptures, she mostly been drawing, small things she found every day during walks with her dog. “The Finds” became daily notes that she posted on Instagram, a way of showing appreciation for the small things in life. However, in every drawing she also added an element that referred to the larger and even cosmic.

There is no great interest in drawings on the art market, she says, but she loves drawing. Paper is like a white universe to her. Everything is possible there: It is a limitless space.